That statement really got me.  How could people living in a fertile, productive land live in such a subsistence manner?  The answer is complicated, as are all things in the Congo.

I’ll get back to that quote in a minute.

This letter is in two parts:  a general update and a “final” report on the last trip, including some good pictures and stories.

First, I want to express my gratitude to you – our financial and prayer partners.  We could not have gone and done the Lord’s work without you.  I see that “partner” statement in missionary letters frequently and usually read right past it.  When I am doing the giving and praying, I don’t feel that my role is very important.  However, we are on the receiving end of your prayers and generosity and we are quite grateful!

Second, I want to express my gratitude to the other members of the team, Robert Horan and Mike Scheffelin.

Mike organized and conducted video training for three groups – YoungLife volunteers, employees of an internet café, and the staff of a Christian radio station.  This trip was Mike’s second trip, and it was great to see him build on relationships previously established and bring some technology resources to Bukavu.  Mike is a great example of our mantra:  Combining Relationships and Resources.  That mantra flows from 1 John 3:16-18.  We take people to Bukavu and let them build relationships and bring resources (knowledge and experience as well as tangible items).  It will be fun to see what the Lord does with Mike’s work.  Let me know if you would like to build relationships and bring resources in an area other than business.

Robert is gifted in many ways.  I marvel at his ability to speak many languages.  He brought his French as well as his entrepreneurial experiences and business education.  The Lord used him with the business seminar students.  He counseled several of them on their plans to start businesses.  He also connected well with the hotel staff.  He never wasted an opportunity to encourage people and show them the love of Jesus Christ.

Now, let’s get to some stories.

Here’s an interesting tidbit for people in business.  In the States, the number one problem for business is the acquisition of customers.  Why?  Because there are lots of businesses fighting for every dollar spent.  It’s hard to rise above the noise.  In the Congo, the number one problem for business is getting the products or services to the customers.  In short, there is much demand, but not much supply.  Anyone ready to move to the Congo and start a business?

Another tidbit:  “Profits are evil.  It’s like you are robbing people when you make a profit.”  These feelings run deep.  I asked them for the Biblical basis of that “truth.”  They quoted “money is a root of all sorts of evil.”  We went to the verse (1 Timothy 6:10) and read the entire verse.  They still didn’t see it.  It is actually the “love of money” that is a root of all sorts of evil.  In Congo, the truth of that verse is vividly displayed – but it is not related to profits from businesses serving people.  Much of the violence that has plagued the region is rooted in the love of money.  Interesting how God’s Word proves to be true in real life.

There is so much I take for granted.

We trained 25 people to think about business and write a plan.  About 10 of them were members of Paul’s startup church.  Paul is a native Congolese, educated and trained in South Africa.  He has a great heart for Jesus and the people of Congo.  Paul also seems to have a feel for business.  His church is comprised of younger people – ideal candidates for starting a business since there are few jobs. 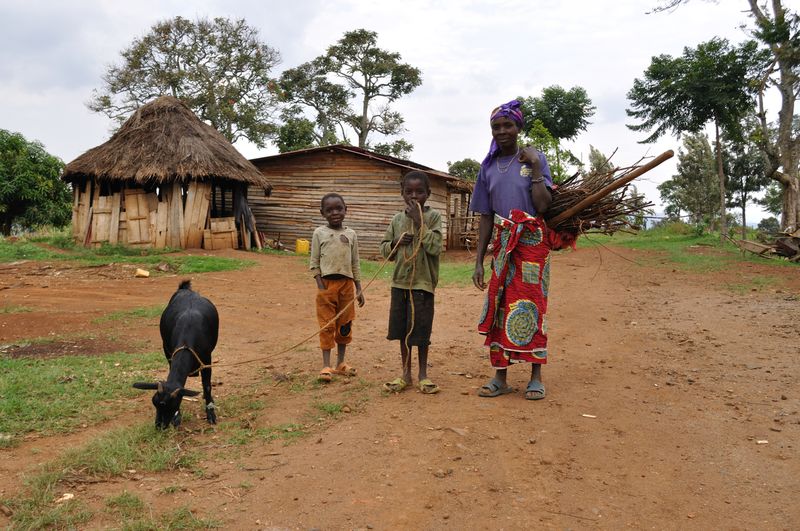 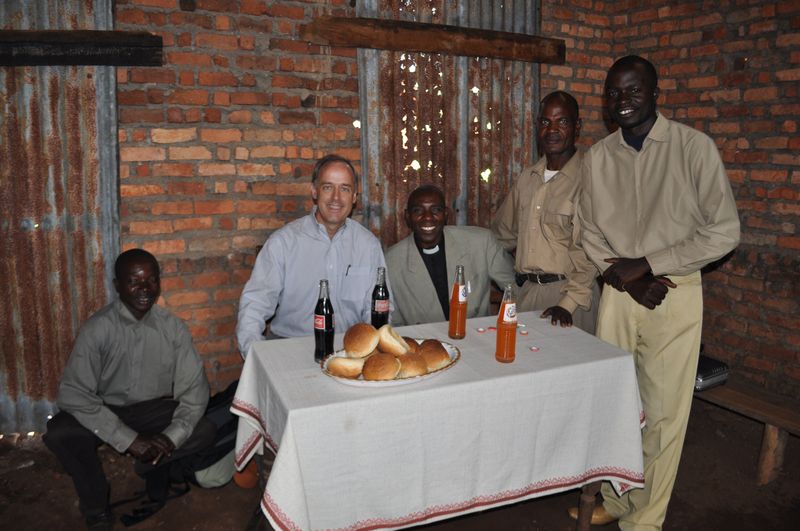 We have received 10 plans.  Some are excellent.  Some need a lot of work.  All of the people have great hearts.  We are working these plans through email and will work with them in small groups and individually when we return in June.“Even Rats Store Food”

One pastor oversees pastors in a large town named LIvungi, about 3 hours away from Bukavu.  During the rainy season, sufficient food cannot be trucked to Livungi so the people are hungry.  The pastor wants to start a business storing food in Livungi to sell during the rainy season.  He told me, “Greg, even rats store food, but we do not.”

Unrelated to this pastor, another student wants to grow food near Livungi and truck it to Bukavu to sell.  It’s not hard to see the synergy there!  We introduced these two people and suggested they work together.  They both submitted plans but the “working together” idea doesn’t seem to be taking.  In all we do, we promote the idea of working together, but that idea doesn’t work well because a lack of trust pervades the culture.

I want to give you an idea of how some people think there.  In many ways, this thinking is an unintended consequence of the work of non-governmental organizations (NGOs).  NGOs funnel money from governments in the developed world to governments and people in the developing world through various programs.  NGOs deal with millions of dollars.  It is that scale that has corrupted the thinking of Congolese people who are considering starting a business.

One guy wants to start a food business, selling 15 different commodities in very large quantities.  He wants $150,000 to start – essentially his total expenses for one year.  His business plan had NO revenue!  He must need a better teacher!  In an email, I suggested he start smaller and that he include revenue.  That change dropped his request down to $100,000.  Ugh.  Interestingly, he also does not believe in profits.  There is a connection! 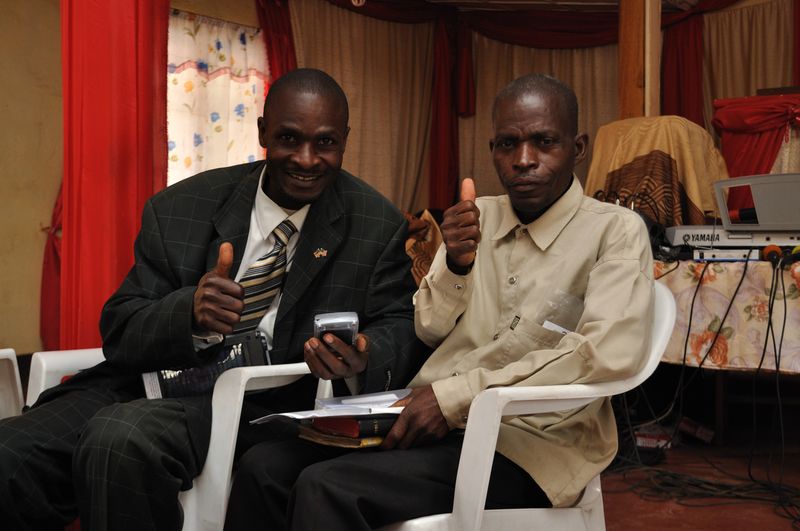 We gave 80 MP3 players to a pastor who oversees about 12 pastors.  We had given a smaller number to him previously.  He will distribute to churches throughout the province of South Kivu. Please pray that God’s Word would take root and grow.

In February 2012, we gave the Grace Church organization 16 players.  During this trip, I received the report below.  We also gave them more players.  I was impressed with their creative use of the players.  I have bolded some poignant comments.

Thank you for the 16 audiobibles you give me for the first time when you were here in Bukavu last year.

The objective to write you is to thank you for the gift you give us. Those audiobibles are serving the ministry of Christ in the Region of Maniema and South Kivu where people cannot have the Bible.

We got from you 16 audiobibles for the Grace Bible Schools in Congo. [These schools train pastors who have not completed a formal education.] Teachers are using them for theirs lessons. Pupils are following the reading of whole book they are studying. It’s very important for them to follow the contents of the Bible even if they do not have light or glasses to read.

In the Pastoral School [students who have completed a formal education] we get 10 audiobible. These audiobibles are serving in many ways:

1) It is used like the library book in the reading room.

2) In training of pupils or their Christian Service, they are using the audiobibles in the hospital to teach and doing the counseling to heal people. Sometime audiobible is serving to help people where pastors live; they give them to listen to the word of life.

3) In evangelization, pupils of the Pastoral School are using these audiobible in the small family groups to study the bible as they prepare one text in the audiobible. After the listening, he ask them questions about the text and invite them to the discussion from the moral lesson.

4) At Kama, there is the Local Radio on FM. Each Monday there is on the program of the listening to the Gospel via audiobible. Audiobible is serving to the people around Kama to get the Gospel.

Two audiobibles are broken down at the Pastoral school at Kama.

I hope if we can get more audiobibles, we can make the Clubs of Audiobible in the village around Kama to help each one to get the Gospel and ask moral questions. Kama is in bad conditions where they have not television, internet, they haven’t the habit to read and audiobible is the solution for them.

Praise God for this young man’s work with the MP3 players.

So many days, so many stories.  Thanks for your encouragement.  We serve a big God!  Only He can help the people of Congo, but it is likely that He will continue to use people like us to do so.
Call or email if you have any questions or comments.

One of the fun things about traveling to weird places like DR Congo is that you meet a lot of interesting people along the way.  On our flight, we met a 50 year old woman who is a nurse.  A few years ago, she would have described herself as a big feminist and decidedly not a Christian.  She went on her first medical mission trip several years ago to the Czech Republic.  She didn’t realize it was a trip organized by Christians.  If she had, she would not have gone.  Uh oh.  They were around a lot of kids who begged her to join their singing of worship songs.  Who can resist the urging of kids?  One song really touched her and caused her to understand the love and truth of Jesus Christ.  By the end of the trip, she came to know Jesus on a personal level.  She came back a changed woman.  The only problem was that her husband who had stayed home had not changed.  Over a few years, she quietly loved her husband into the kingdom of God.  Now, she travels by herself to a Rwandan village for five weeks every three months to serve as a nurse in a local clinic.  Her husband works in the States to make it all work.  Beautiful!

Are you ready to go now? 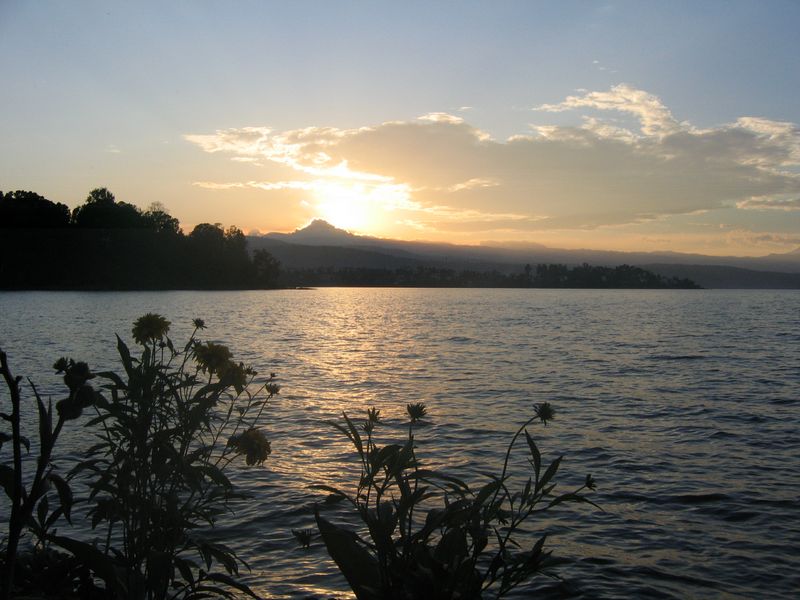 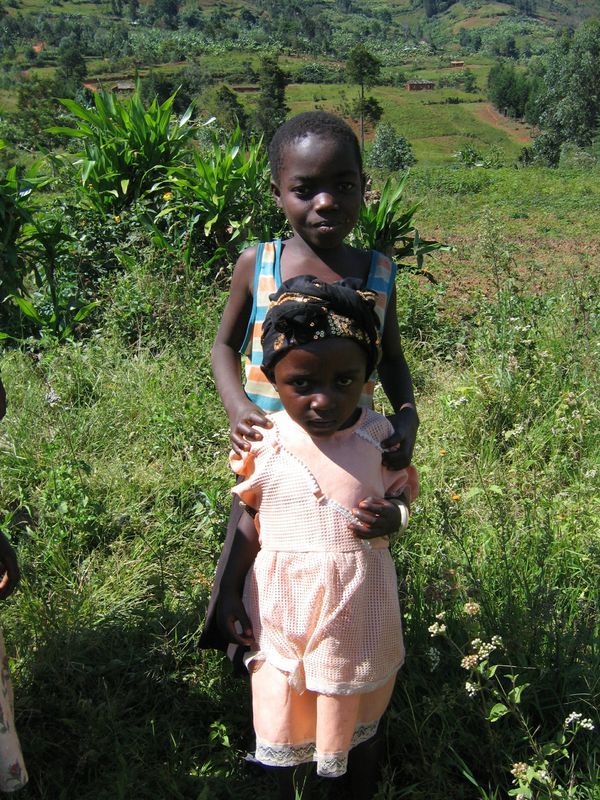 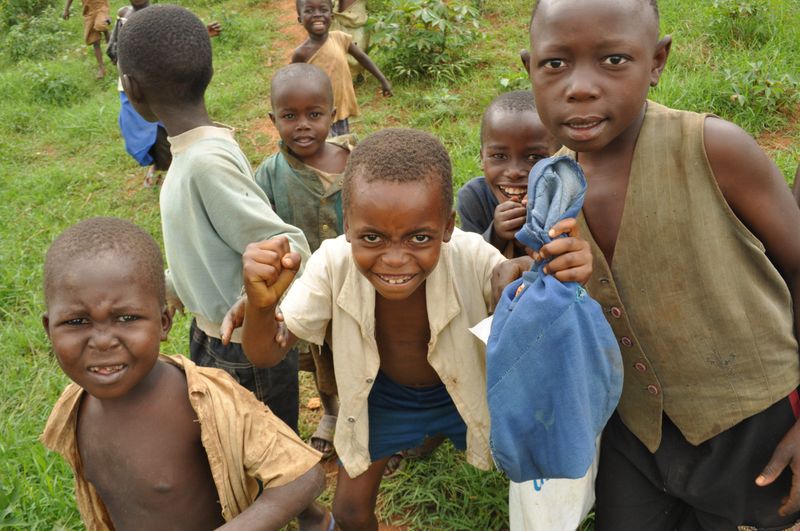 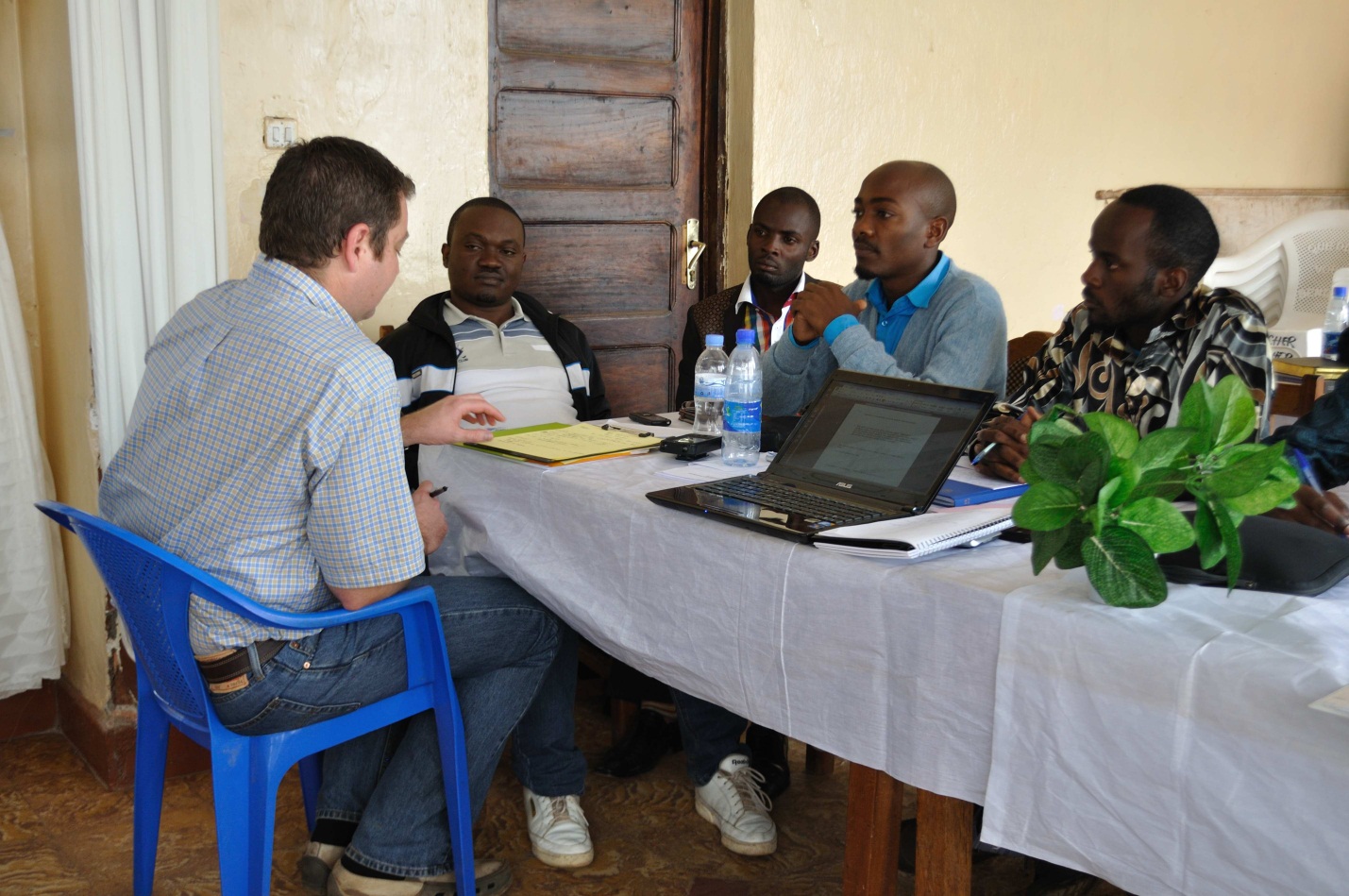 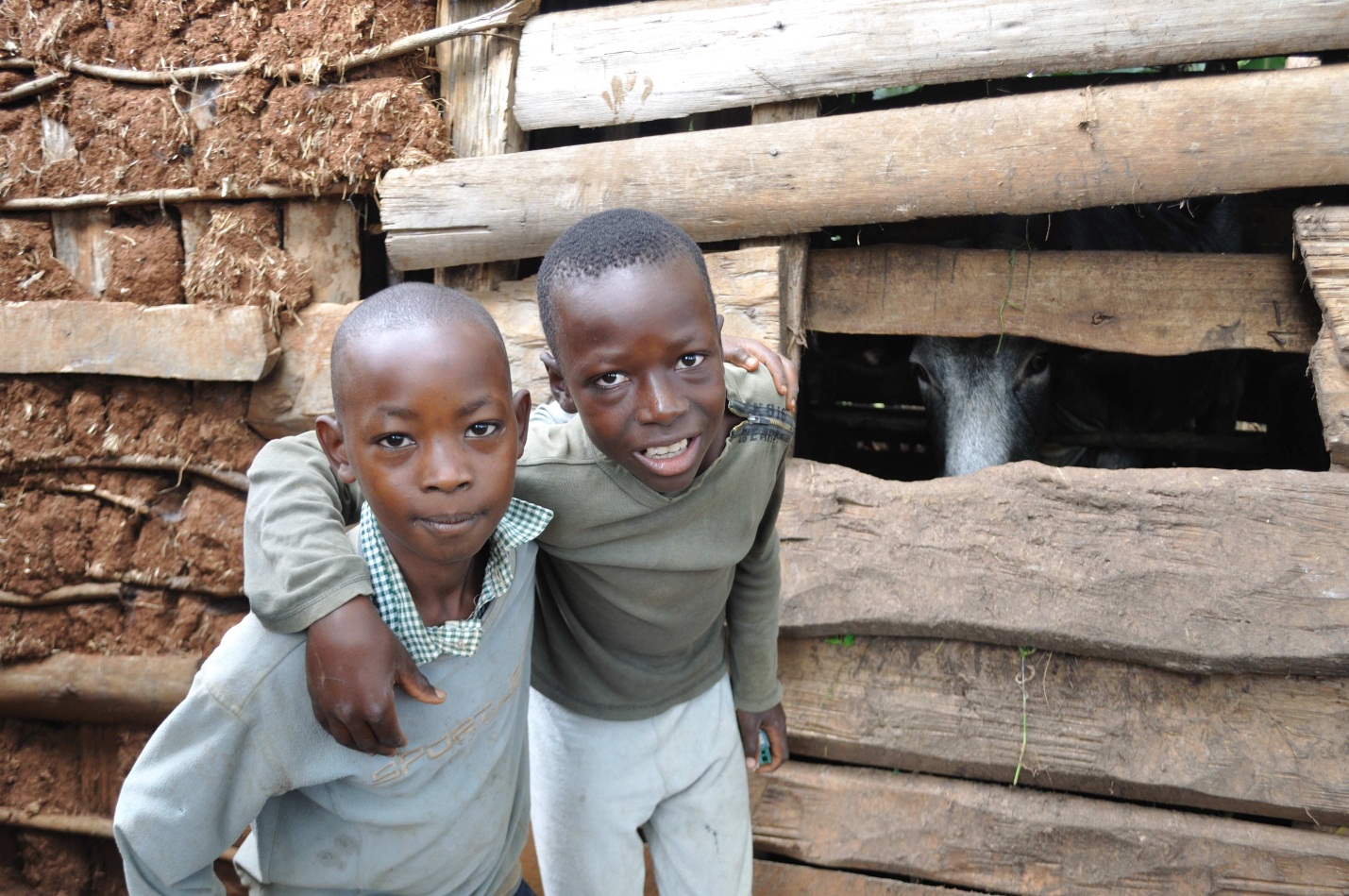 How many eyes do you see?  (Everyone shares the house.  The cow is a very important part of the family and easily occupies half the house.) 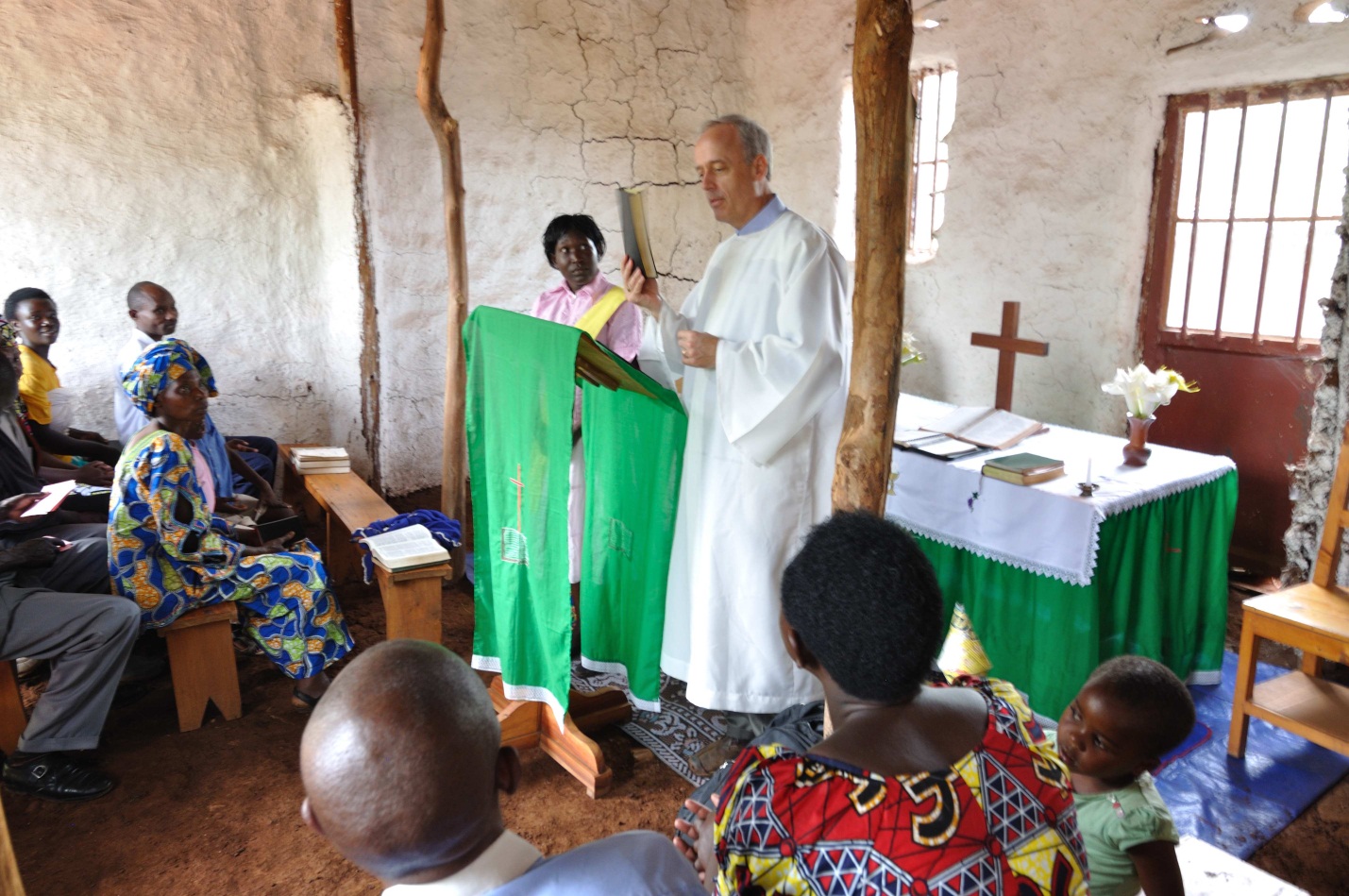 Greg preaching about the power of the Word of God. 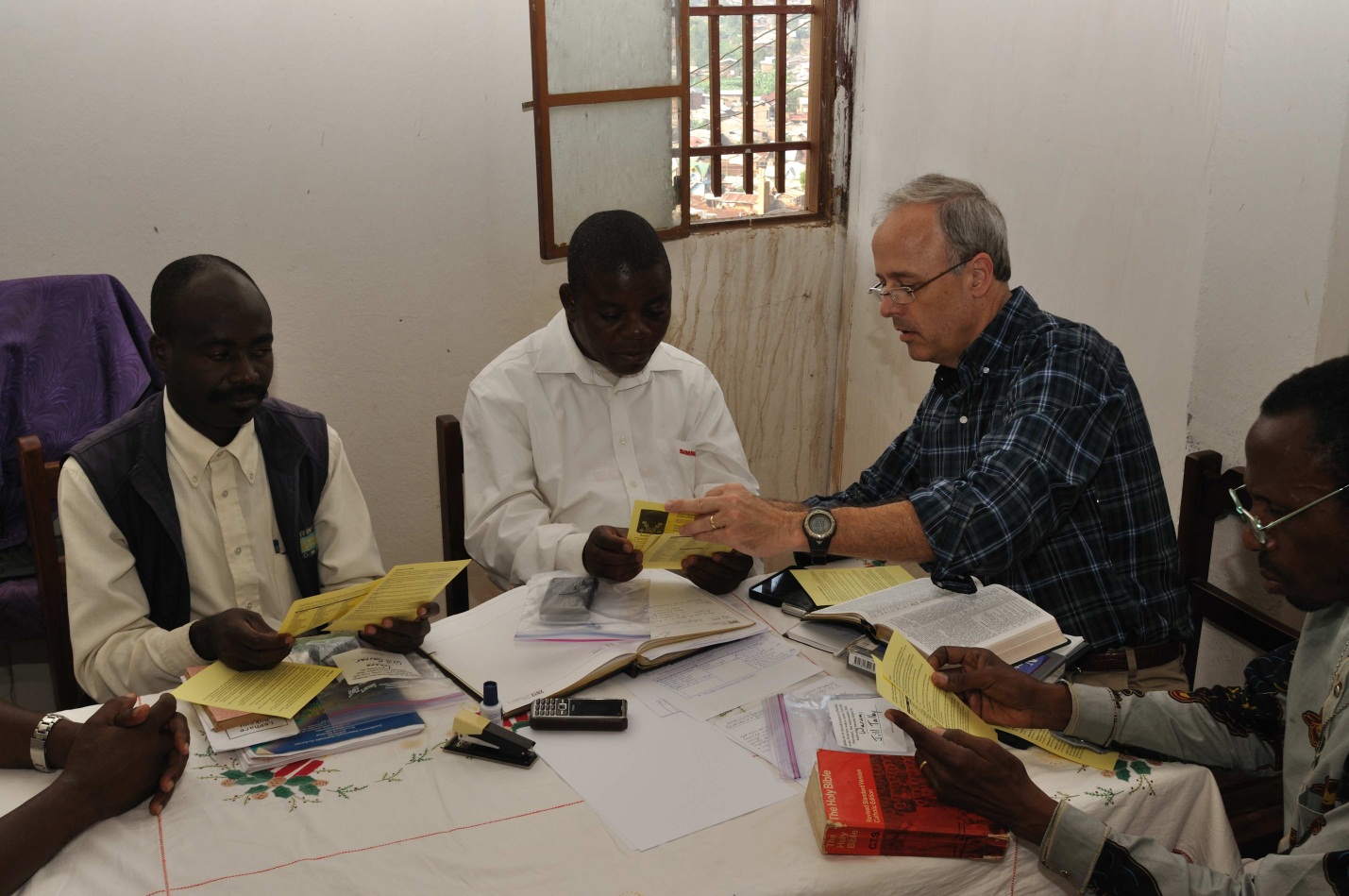 Greg teaching about the importance of the Word of God and training pastors in the use of the MP3 players. 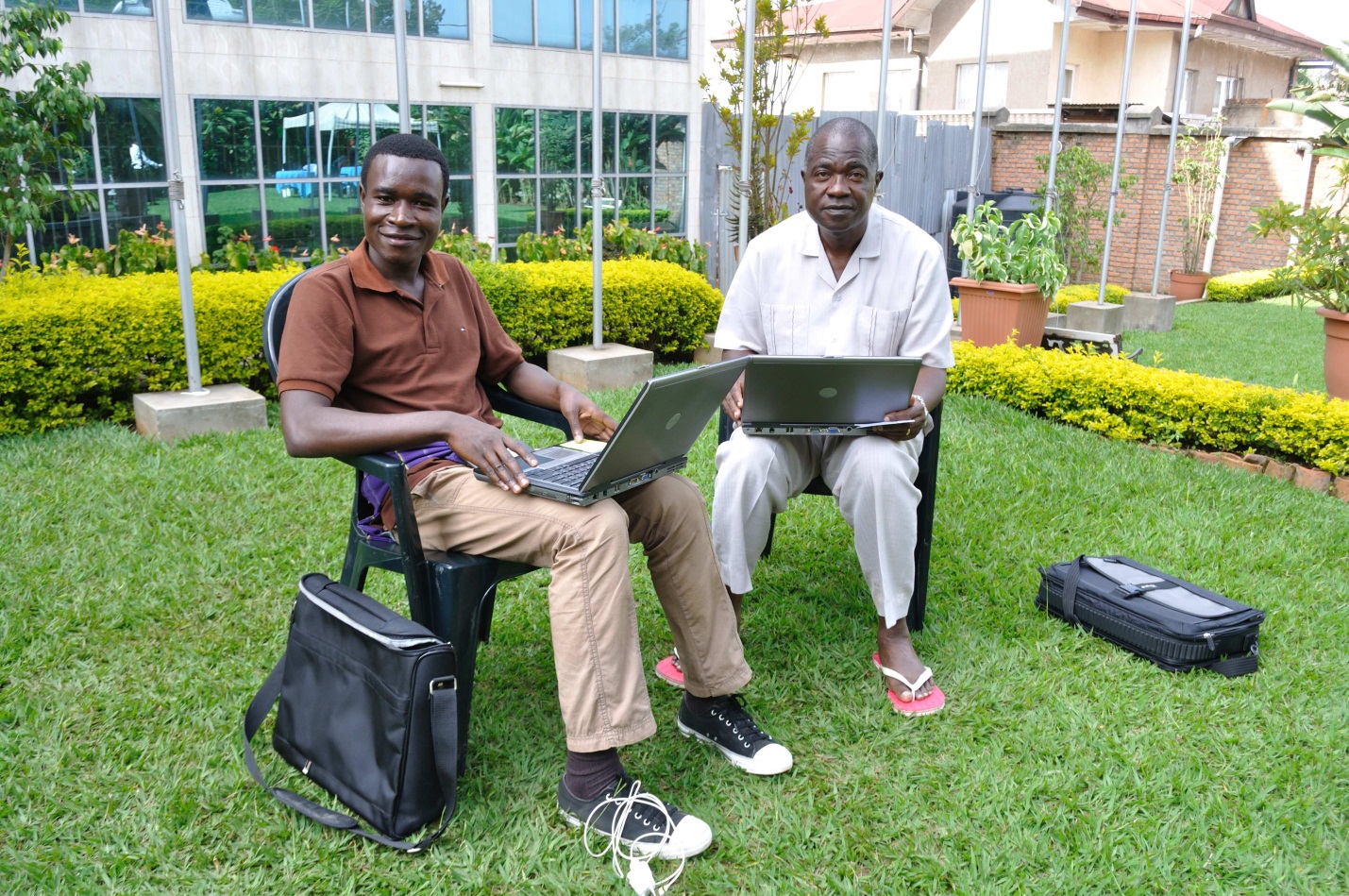 Delivering some computers to our translators from our friends in the States – Look at those happy faces!